Cambodia, a country with two faces

We’ve ridden our bikes for our last kilometers in Vietnam and we’re now facing the Cambodian border. No problems to go out of Vietnam. To enter Cambodia was another story. We’ve been told that corruption is common here. So common that everybody can see it. We had read informations on the embassy website and advices from other travelers, so we started the process. First we’re asked $ 35 instead of $30. We refused. So we’re asked $32. Once again we refused. And we were waiting. We had plenty of time. The custom officer grumbled. That’s how a fight using only our faces start, and it went on for about fifteen minutes until our passports flew over the counter… Let’s not talk about the doctor who asked for $1 for a «check-up » . Here we are in Cambodia, our passports stamped.

Cambodia : one of us, one of them

For the beginning of our itinerary we rode along the south coast. We passed by the towns of Kampot and Sihanoukville. There were a lot of tourists, so we didn’t feel at ease. These « resort towns » lack real contacts with locals. To them, a white person is merely a wallet on foot. How could we blame them when we saw all these tourists waving all those dollars for a service ? We left quickly the beach, even though it was beautiful because we were tired of people trying to sell us bracelets, fruit or massages. But we could find this spirit everywhere. Talk about double standards. A white person has money, so everything will always be more expensive. We had to negociate everything there : for a meal or a bottle of water. Paying a little bit more, why not, even though it doesn’t seem fair, but when a Cambodian person is before us to buy the same thing and that the price is three or even five times higher, it is annoying. When we were resting in Sihanoukville, we chose not to go to touristy places and chose to try to discover another face of Cambodia. 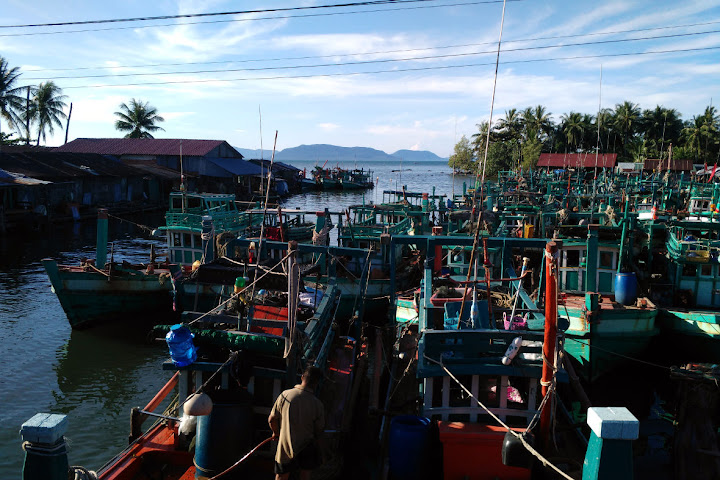 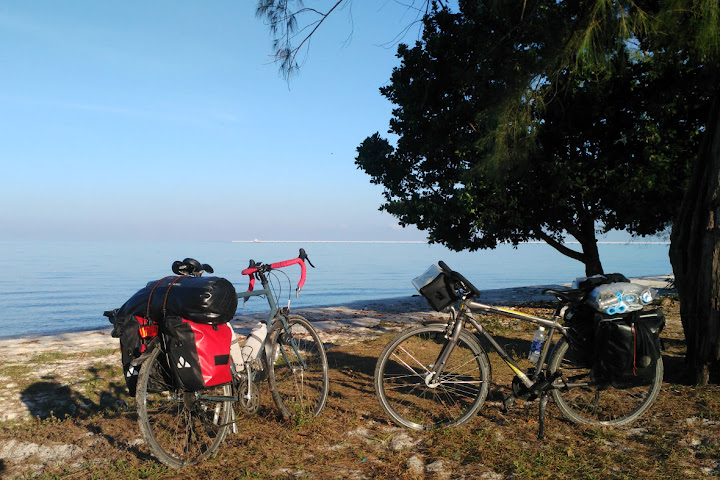 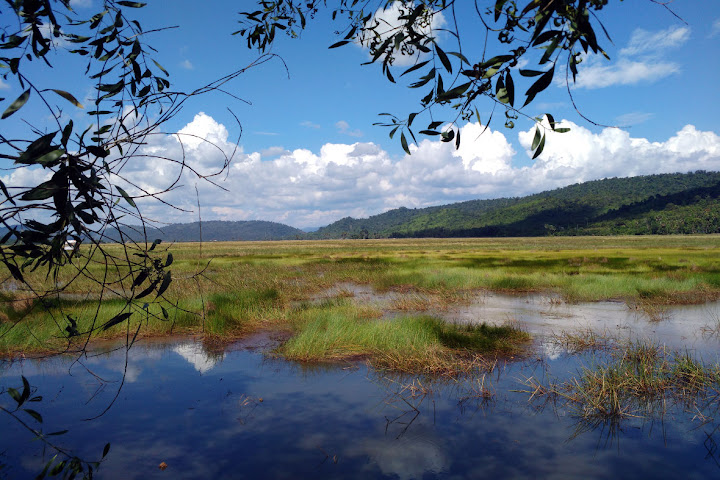 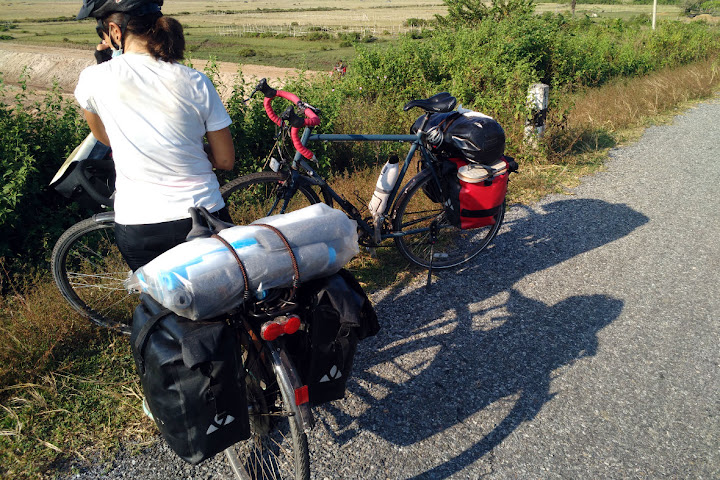 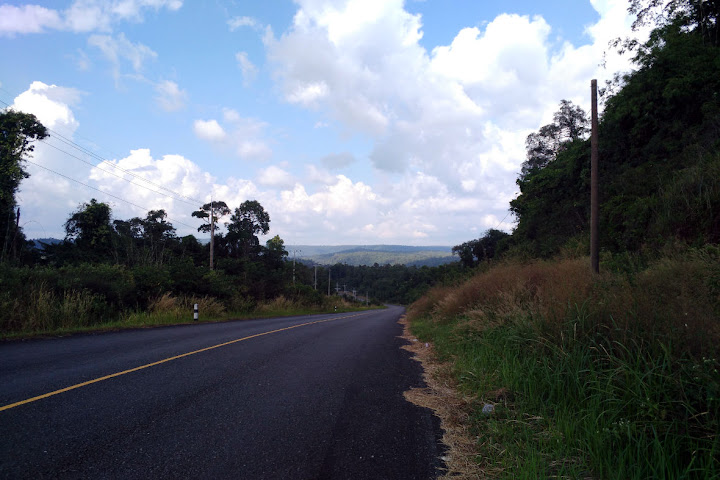 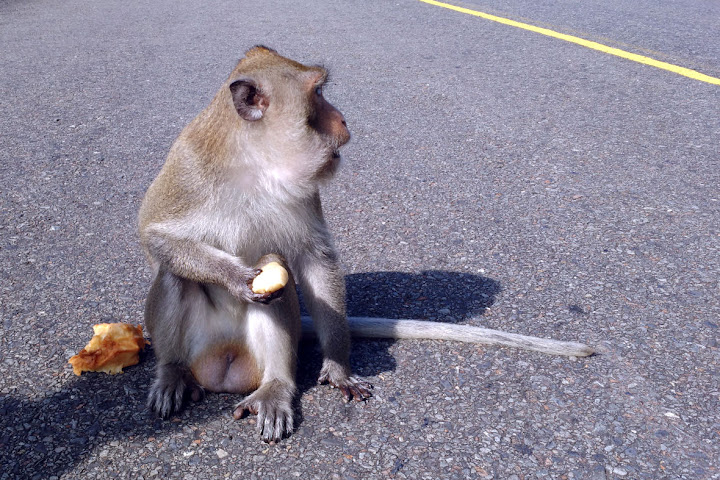 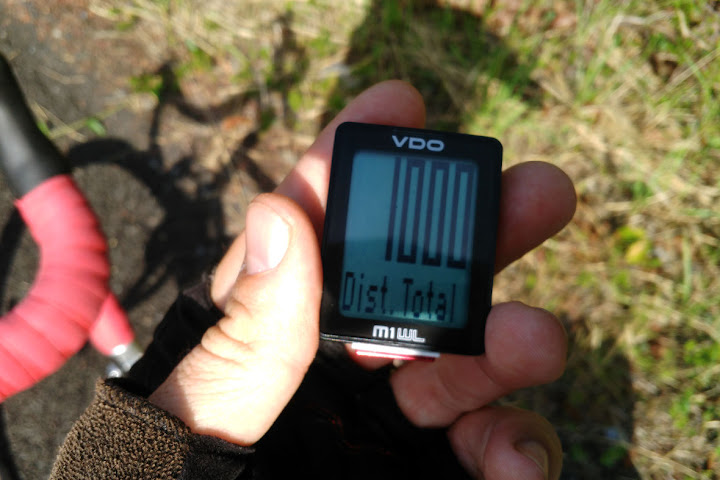 This was exactly the time when Antoine told us about a trail in the mountains of the Phnum Samkoh park. So we think about a new itinerary of about 600 kilometers to ride to the Cambodian capital, Phnom Penh, without crossing big cities. The main challenges were the positive difference in height of more than 2800 kilometers on three days, the lack of food and water. But the opportunity for us to be alone and have some peace sound like a dream.

So we got back at the beginning of the trail two days after. The surfacing is good, that’s great. After a few hundred meters, there was a slope. Small chain wheel, high pinion, it squeaked, it hurt. Some locals worked along the trail. They stared at us, they laughed at us, while we were sweating riding up voluntarily… But we were sure we were right to do that when we were at the top. The landscapes around us are amazing. The river along which we slept the day before winds as far as we could see it. But our road changes course and we were soon away of the river and into a forest, which could be qualified as « primary ». The vegetation is green and thick. The sounds we could hear were mostly unknown to us. We loved riding in the shadows of the trees. There were another slopes, but it was time for us to stop. There was a small river between flat rocks just a few meters from us. We were hidden by bushes, so we quickly went into the water. We finally got ride of all the sweat and of the heat, it was a true happy moment ! We camped there and had a small meal (we had to be careful with food)…

The day after our legs were sore. So we got slowly on track. There were a lot of slopes, more or less hard. The ciment disappeared and the trail became red. We could see the trail travelling through the mountains, a contrast with the green colour from the forest. Riding our bikes on this trail is somewhat strange. Let’s say that we felt like adventurers, the red of the trail taking over our tyres, bikes, clothes, bodies…

The few ATV that passed us submerged us in red from head to toe. We were in that state when we arrived in a tiny village. Exhausted we stopped to buy water from a small lady, we thought about camping next to the lake. But it came out that this woman is known to us, she hosted Antoine and quickly offered us accommodation. We were grateful, we put out things on the ground and wandered in the village in search for food. We rode a little bit when suddenly people waved at us to come. It’s such an opportunity. We put our bikes on the ground, sat in the circle. We’re given beers, rice and lots of other food, like it was magic. We were told a young couple was getting married, that we should make the most of it. After eating more than we had eaten in three days we’re forced to dance. It was hard for us to refuse after such a welcome. Then it got dark. We left these really nice people to have a shower in the lake while being watched by a cow. Then we met our host for the night. 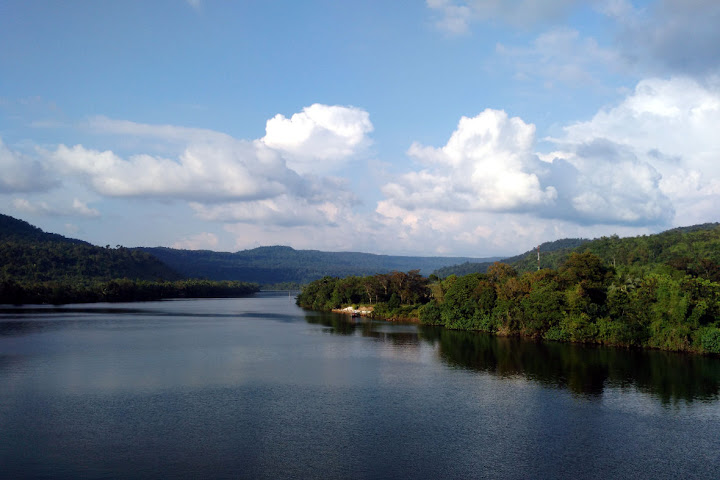 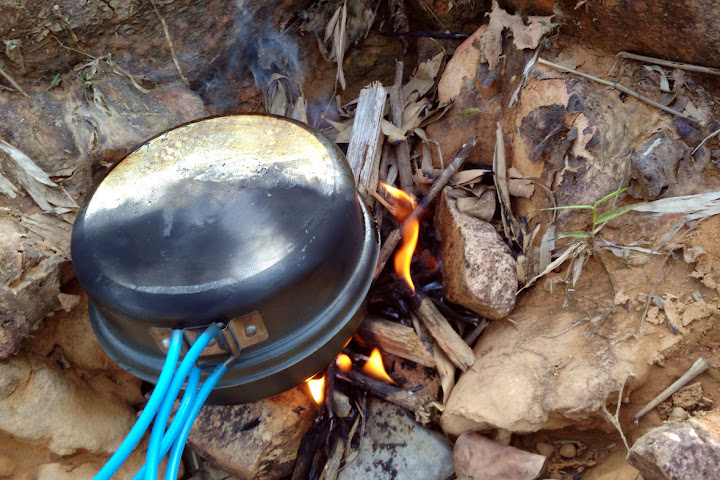 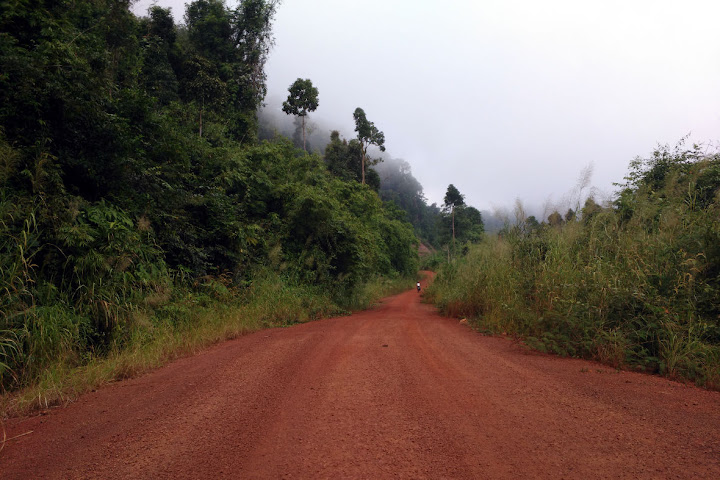 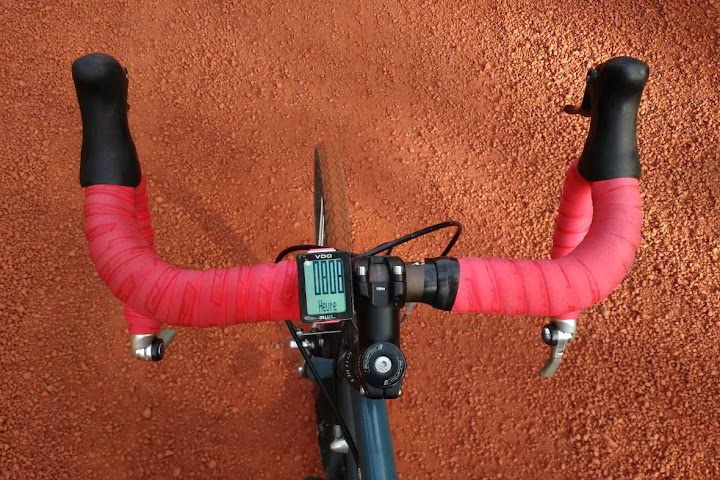 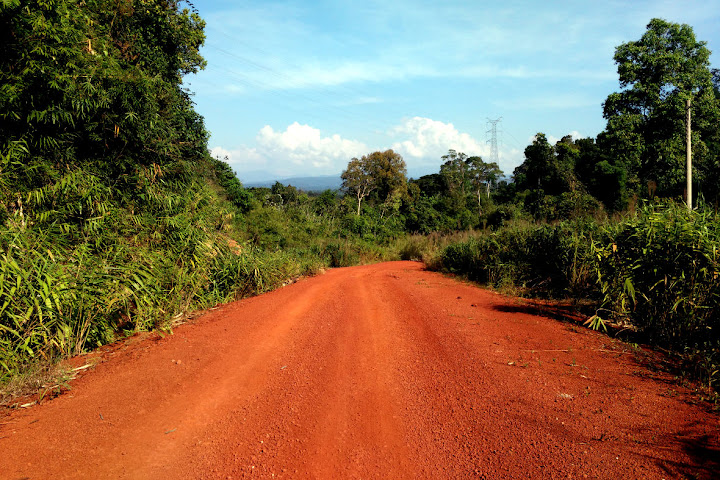 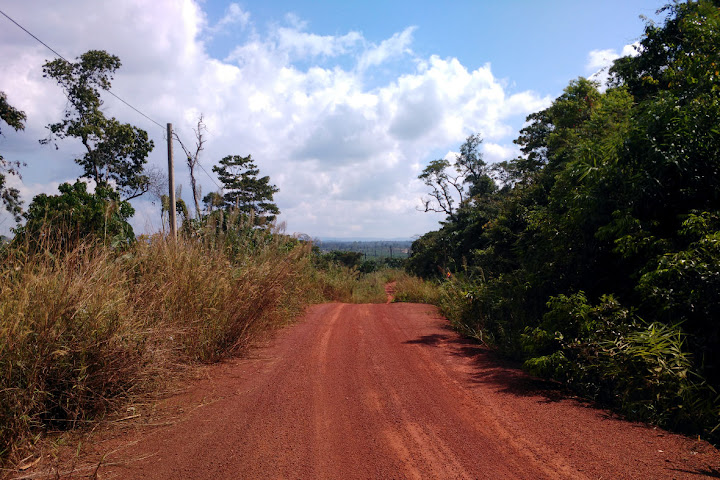 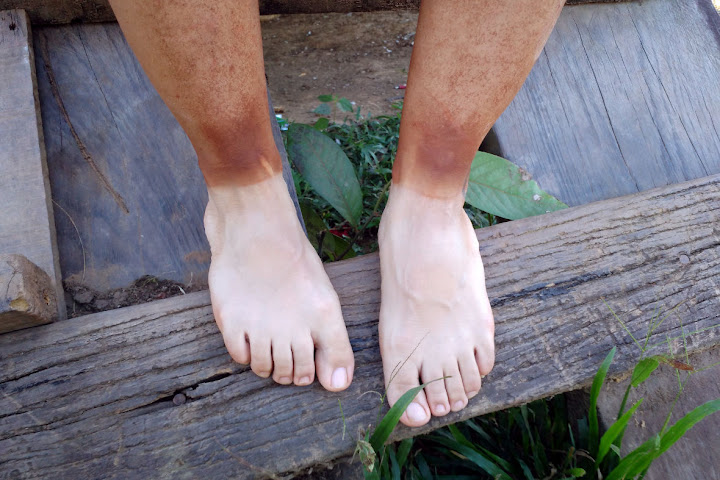 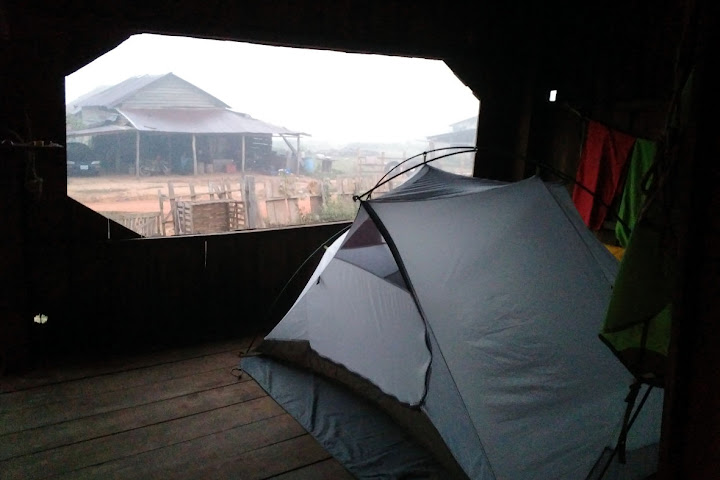 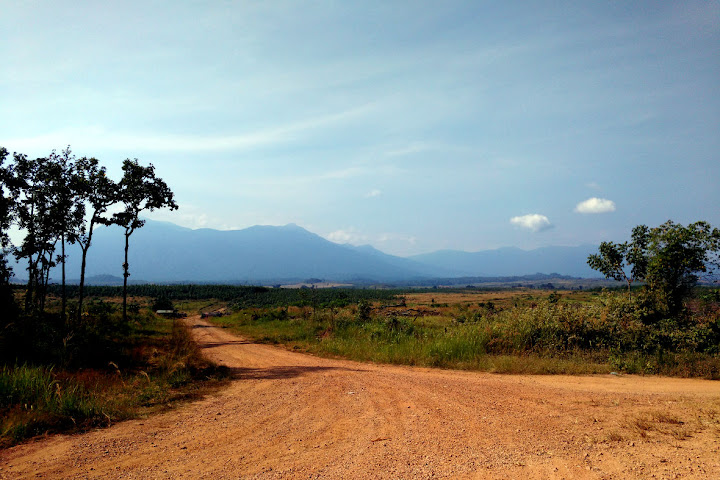 These few days brought us back together with Cambodia. First, because we enjoyed beautiful and preserved landscapes. Then because of the challenge that allowed us to live intensely this adventure. Last because of the people of this village hidden in these mountains who welcomed us so cheerfully. That was what we had missed so far and that’s what makes our trip unforgettable.

➔
A day at Angkor